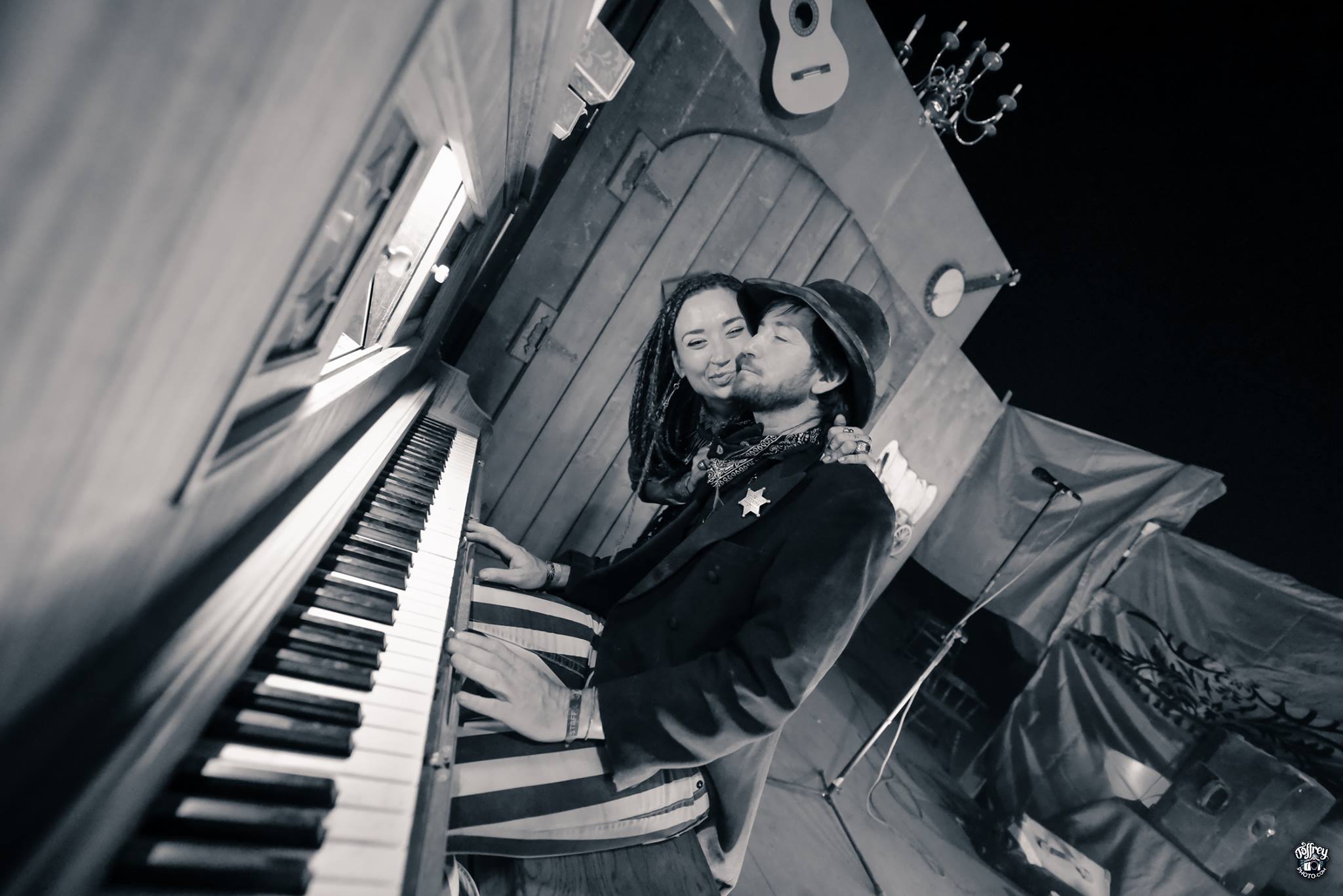 In its fully realized form, the Roadkill Saloon is an immersive experience—live drama and wry humor combined with interactive robots and technology, staged within a fully-realized western ghost town known as Crowder’s Bend. Though it defies simple explanation, this Wild West saloon/brothel/cabaret murder mystery funhouse packs as much amusement and craziness as possible into 2600 square feet.

Crowder’s Bend, 1863. This booming frontier mining town has gone bust. Everything changes with the appearance of Frances Federico Fallon, a mysterious Eastern dandy and eccentric with a taste for vices and a genius for mechanization. With promises to “Bring back the Boom” through the marvels of automation, Fallon commands a great deal of obedience from the desperate occupants of this lawless frontier. But there is a dark side to his benevolence—and a dangerous eastern cartel behind his experiments who have much more esoteric and immoral goals in mind.

Through “The Roadkill Saloon,” we invite you to explore the modern ghost town that Crowder’s Bend has become, abandoned in 1866 in the wake of mysterious happenings and a series of horrific murders. Populated only by out-of-luck drifters and the surviving automatons of Fallon’s bloody laboratory, the town has been kept alive by sheer force of will and the undying genius of a disturbed mind who refuses—at least for the time being—to stay dead.

Who killed Frank Fallon, and why? This is the mystery at the heart of the experience, unveiled over 45 minutes as audience members interact with human actors and sentient robots, moving through 6 separate scenes including an outhouse, bedroom, laboratory, a town square, a brothel, a saloon, and finally, the vaudeville cabaret where the mystery is revealed with the storied murder repeating itself in the final act.

“The Mech-Can-Can”— a mechanized, hydraulic-driven line of Can-Can dancers with midi-controlled musical interface

“Arlo”— a roaming sweeperbot that follows passersby, cleaning up after the party and generally getting in the way

“Oleander Sweet: Androidgenous Harlot” — this coin-operated “brothel” is run by Oleander, a saucy synth who always gives cowboys and cowgirls a bit more than they bargained for.

“Bosphorus” — Here lives the soul of an ornery and foul-mouthed cowpoke, entombed in a Depression-era radio. He never tells you what you want to hear, but more often than not he tells the truth.

“Early Knight’s Saloon” — Belly up to the bar of this wild west watering hole, bedecked in impossible taxidermy and lit by the neon of legendary honky tonks of old. If you’re lucky, you’ll get a shot of whiskey…  if you ain’t lucky you’ll just get shot.

“The Brokedown Opry” — This vaudeville-style cabaret features some of the most outlandish acts west of the Pecos. Sit down, stand up, dance a little, laugh a lot. But beware: Murder is afoot.

TNT Inventions is a collaboration between installation artist, writer, and builder Tucker Teutsch 3.0 and Tom Sepe, a multimedia artist, fabricator, and performer with a penchant for activism and mischief. Between them, they have managed hundreds of creative projects, including the Raygun Gothic Rocket Ship, the 2008 Burning Man Temple, Steampunk Treehouse, PDX Bridge Festival, and art projects on various continents around the world. They currently spend large chunks of time running around a big barn in a field in Oregon, building amazing and unbelievable things for fun.

The Roadkill Saloon illustrates a belief that interactivity and whimsicality lie at the heart of modern artistic experience. Dedicated, interactive, immersive experiences (such as escape rooms, Meow Wolf, Sleep No More, etc) have become extremely popular, as people seek out new forms of entertainment that engage them on an authentic level. TNT Creations is one of the first to successfully transfer this medium into a mobile, temporary festival setting, through the creation of Crowder’s Bend and the Roadkill Saloon storyline.

The various combined  set pieces of  the Roadkill Saloon were created to be modular, and thus scalable to meet the needs of any event. These include various robots, interactive technology, live actors, vaudeville acts, and individual scenes that can be shifted around and modified to tell a story or create an intimate (but memorable) environment. Three options are given, but please note that much more (or less) is possible depending upon spatial considerations and available budget.

12’x30’ facade with all of the droids on display. Passersby are herded into an Instagram-ready backdrop and can interact with robots and costumed hosts. Photo booth optional.

An intimate Saloon environment combining a 12’x30’ exterior facade with the Mech-Can-Can and sweeperbot outside, and an interior saloon/speakeasy with costumed bartender, two more interactive robots, and a small stage for loosely scheduled vaudeville entertainment and impromptu player piano dance parties. Pricing depends upon how concessions are handled .

The whole shebang. This requires a dedicated 2500 sq ft area with private backstage to build out the full set (six unique scenes) and accommodate nine actors and various vaudeville acts.